The LEGO Ideas story: How brands can take a page out of LEGO’s co-creation and innovation playbook

The LEGO Ideas story: How brands can take a page out of LEGO’s co-creation and innovation playbook

Brands of any industry can be successful at co-creation - they just need to make the investment in reaching out to their superconsumers and build a community of co-creation around them.

Did you know? One of the most successful innovation platforms of the last five years - LEGO Ideas - is powered by Chaordix.

LEGO Ideas is an online community which brings together passionate fans and creators from around the world to imagine, iterate, and evaluate ideas for new LEGO kits. It is a great example of open innovation and co-creation, where members have actively participated in the journeys of several successful products from idea to development.

The LEGO Group first dove into the online open innovation space in the early days of crowdsourcing when they launched LEGO Cuusoo in 2008, where Japanese fans shared their own LEGO creations that ultimately made their way onto toy store shelves.

Some famous creations include the DeLorean from Back to the Future, and the 30th anniversary Ghostbusters set. The LEGO Group then approached Chaordix to make a global brand community, and launched the beta version of the site in 2012. LEGO Ideas officially launched in April 2014.

The process behind LEGO Ideas is simple:

LEGO has been an ideal customer for us because they have passionate fans who have grown up building their own creations using the company’s classic building sets.

Their fans are naturally creative, and many have always shared their builds with other enthusiasts. In many ways, the LEGO fan community is the epitome of creativity and innovation. The partnership between LEGO and Chaordix was a natural fit.

To date, LEGO Ideas has close to 1.5 million members who have submitted more than 33,000 project concepts. Of these submissions, 30 co-created kits have been brought to market, including The Beatles Yellow Submarine (now retired) and Women of NASA, and the International Space Station.

According to LEGO's Innovation & Direction Design Lead at the time, Stiven Kerestegian, the company has been able to shorten time-to-market from two years to six months.

LEGO Ideas has tapped into a creative pool that the company knew existed, but did not have direct access to in the past. The platform has created a path for the company and its fans to truly collaborate.

Previously, LEGO had a traditional closed innovation process which, although successful, limited creativity and took more time from ideation to commercialization. When LEGO Cuusoo first opened, the company was able to connect with some of their biggest, most creative, and most loyal fans. They found a true community of superfans who had been looking for a way to share their creations with other LEGO loyalists. The company has been able to reach not only LEGO fanatics who had been working on their own creations since childhood, but other LEGO fans who did not previously consider making their own LEGO kits and sharing them with their peers.

If You Like This: How co-creation impacts the customer experience

LEGO has long recognized the impact their products have had on their fans’ lives, and the LEGO Ideas platform has helped them give those fans a way to truly feel like they are part of the brand’s success.

Fans can see that not only do they have a direct line of communication with the company, they can also fulfill a life-long dream, tap into their inner child and creativity, and feel like a total rockstar among other fans. The creators of recent successful kits have been profiled on CNN and Mental Floss. Kevin Szeto, a Toronto-based aerospace engineer who was the brains behind The Beatles Yellow Submarine kit, received the full rockstar treatment when his winning kit was formally launched in Liverpool, England in 2016.

Designs that are not even approved yet have gotten some buzz outside the community.

In the early days, the platform was quite open-ended, and any project idea was welcome for submission. After all, play is at the core of LEGO, and imagination and creativity are two of their main brand values. These were essential to the creation of the community.

Now, as the community has grown, LEGO has provided more guidelines to help creators succeed and give them a better sense of what makes a submission more likely to be commercialized as a kit. The time to garner support has been shortened to one year, and there is a formal review process performed by the LEGO team.

Members also stay engaged within the community by participating in new, added exercises, which they can use to earn points that they can use as ‘currency’ elsewhere on the platform.

But what makes LEGO Ideas really stand out is its community’s shared support and excitement for project ideas that are coming down the pipeline. Members do not see other members as their competition; rather, they see them as co-creators whose success they can share in once a product is selected and sold in stores. Many members do not end up submitting their own project ideas, but join to support others.

LEGO understands that the Ideas community is not meant to be tightly controlled. They know that fans are brand advocates in their own right, and restricting their creativity can have a negative impact on the community and the collaborative process.

Most of all, LEGO Ideas provides mutual value to both LEGO and its fans.

LEGO gets a constant stream of creative product ideas to boost its innovation efforts and co-created kits sell out instantly as demand has already been built up through the community – and for LEGO fans, it’s like a dream come true to have their ideas brought to life by the iconic brand.

So how can marketers and product developers learn from LEGO Ideas and build a co-creative community for their own brand?

Although the success of LEGO Ideas might seem like a slam dunk to some because the brand already enjoys a fierce loyal following, some think that this model of co-creation, collaboration, and open innovation might not be transferable to their own companies. However, the same principles of customer driven innovation and engagement can be applied into other types of businesses and needs.

“Every brand or product has its own set of superfans,” says Sharon McIntyre, Chief Social Scientist at Chaordix. “You can tap into them and create a community environment with members who are already highly engaged and want to help you and your brand.”

McIntyre refers to the idea of superconsumers, a term that was coined by Eddie Yoon, a marketing consultant. Yoon says that every person is a superconsumer of something, and therefore, there are superconsumers for every brand. “Because they know a product so intimately, they could have insights into brands that management teams may lack,” according to this article from strategy+business.

Just as LEGO tapped into their superfans when they started their venture into co-creation, any company can take the same first step and identify these superfans and reach out to them, as they already have an established sense of trust and emotional attachment to your brand or product.

“Oftentimes these superfans have a lot of insights and feedback that they already want to share with you,” says McIntyre.

The feedback can span from product usage, to marketing, and anywhere in between. They have a strong desire to collaborate directly with your brand because they care about it on an emotional level. Once this community of engaged brand advocates has been established, the community can begin to grow.

Read Next: 3 must-knows for making your online community an innovation hub

Beyond the first level of superfans, you can also begin reaching out to fans of your brand or product, who can then become engaged once they see the collaboration between your company and its most passionate customers.

LEGO Ideas is a shining example of collaborative innovation, customer co-creation and community engagement on a global scale. The same can happen for any brand with passionate fans and a willingness to tap into the creativity of its customers.

What new ideas can your fans co-create with you today? Lean more: Our Community Platform Features. 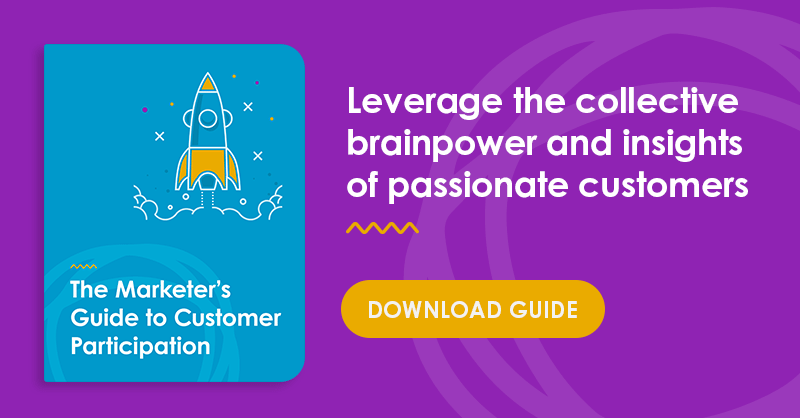 Inside the Creator's Studio: Helping the paint peo...

The LEGO Ideas story: How brands can take a page out of LEGO’s co-creation and innovation playbook  Mar 14, 2018
6 key areas for customer co-creation and brand collaboration Sep 04, 2018
When Community Clicks: The LEGO Ideas Story Oct 17, 2019
5 ways to use design thinking for a better customer experience May 09, 2018
How enterprise brands do it: The best examples of crowdsourced innovation Jul 04, 2018